In the two and a half weeks since reintroducing the long-ago discussed concept of using the former Lafarge lands in Guelph as a major transit station to Guelph city council, the stories that have been pointed out to me on the topic of parking problems in other cities are absolutely staggering.

As I learn more about it, it is becoming apparent to me that we really have no choice but to save a very large portion of these lands for a park-and ride. I can only offer the developers that they can still make their money on this land - and lots of it - if they concentrate on not only allowing this, but encouraging it with a small commercial centre and a large high-density residential centre.

First: according to this article in the Toronto Star, it took Barrie two months to fill its 480 parking spaces. Since service was introduced in November of last year with an estimated initial customer base of only 150 people travelling each way, this is completely remarkable. GO transit is already on the hunt for a new station with more parking in that city, which, along with Guelph, the NDP deprived of GO service during their short stint in provincial office rather than expanding it.

Second: my friend and fellow blogger Stephen Host posted this excellent analysis of GO station parking lots in our immediate area. In it he shows the scale of parking lots needed in the area.

Third: a quick look to our neighbours to the east in Montreal shows just how bad things can get if you do not plan parking at your commuter stations far enough ahead. This article in the Montreal Gazette discusses the fate of the Roxboro AMT (Montreal's equivalent of GO) station, which has a 776 car lot, and 2,835 daily commuters trying to share those spaces. You can see the total parking on GO's network at each of their stations on their website.

Fourth: while you are thinking about the various scales of the parking lots and train stations in the previous three points, consider this photo, which my wife took just last weekend of Guelph's existing Via station, the future home of GO service in this city if we do not take parking seriously: 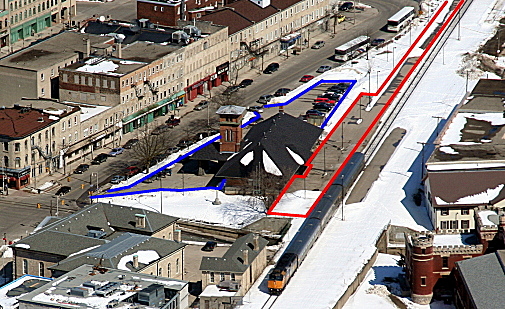 The keen-eyed observer will note that the station platform, outlined in red, is substantially larger than the parking lot, itself mostly full on a Sunday afternoon, outlined in blue. Further worth noting is that the train pulling out of the station - VIA 85, Toronto-Sarnia daily, scheduled through Guelph at 12:04 - is three cars long. A standard GO train on most lines, including the line that terminates at Georgetown and will soon be extended to Guelph, use 10-car GO trains with plans to expand them to 12-car sets with GO's recent acquisition of new, more powerful, locomotives. The station parking lot is scheduled for demolition in just one year, to be replaced by a bus terminal for the city's busses, meaning this already-full -- on a weekend, without a commuter train -- parking lot, is about to go away, sending rail transit commuters, well, elsewhere, though noone is saying quite where that might be.

Fifth: Bramalea GO station, which boasts 2,150 parking spaces, the easternmost of four GO stations that exist on a very busy Canadian National freight line that overlaps GO service between Bramalea and Georgetown, has two major parking lots. This is what the secondary one, the 650-spot south lot, looked like in 2006, in this photo taken by my friend Dan Dell'Unto. It hasn't gotten any better since: 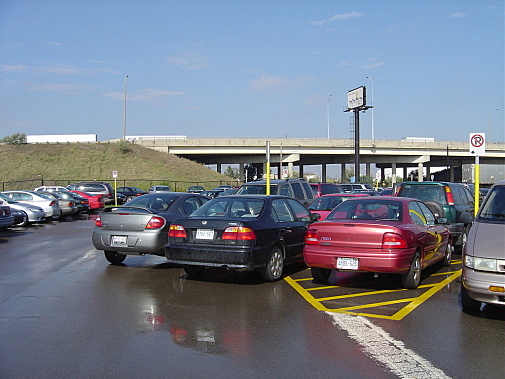 Sixth: Aldershot station, the nearest station to Hamilton with parking, has 1,020 parking spaces in its north lot, with a new lot several times the size about to open on the south side of the tracks. As it is not yet open, the number of spaces that will be available has not yet been published, but the two stations immediately to the east of Aldershot, spaced about 3 miles apart, are Burlington and Appleby, with 1,574 and 2,422 parking spaces respectively.

And on and on the warning goes. If we do not protect the former Lafarge lands for this purpose, we will be up transit creek without a parking spot.

Have any more thoughts on the topic of our woeful underplanning for transit? Post them below for all to see and discuss. We need this discourse.

That is the number of official GO transit parking spaces listed on their website.

More food for thought, and probably worthy of another entry:

Those 18 trains a day to Guelph don't count the Toronto Streetcar Railway which connected Guelph to Toronto via streetcar on the alignment now used only by the Halton County Radial Railway museum in Rockwood, nor does it count Hamilton-Goderich passenger service through Guelph along the Guelph Junction Railway through downtown serviced by the Canadian Pacific.

As far as I can tell, passenger interchange service between this line and the two CN lines was also provided at Guelph Junction, next to the Lafarge property, by going up the now-defunct track known as "CN Spurline Park" in Guelph, at the north end of Centennial Park.

In essence, circa 1917, Guelph likely had upward of 30 passenger trains per day leaving the city in seven directions, for a population a small fraction of what it is today, meeting at the eastern tip of the Lafarge property, and in the case of the city's Streetcar, east-west CN service, and Toronto-bound streetcar line, at what will soon once again be the Transit Hub downtown.

We do seem to be going in circles.

Interesting side note (at least to me and probably to you) my next door neighbour was very high in the CN heirarchy and he told me that the passenger cars on that line dated back to the First World War (this was in the 1970's) and if there ever was a derailment it would be a disaster. I think that since he travelled that way he used to make sure the tracks were in good shape.